“For ordinary people, the materialist vision is rather seductive; they become obsessed by the vision of the human being as a merely physical object, a lump of flesh suspended between the two poles of pleasure and pain. And that reductive vision gives rise to all that is most repugnant in the culture that now agonizes us. Human beings are put on display as objects, deprived of their freedom and divested of their capacity for love, gift, sacrifice, and service. And many people spend their days gripped by images of this degradation, watching the physical destruction of fellow human beings in violent movies or their physical excitement in pornographic movies. These loveless images are tempting because they remove from the human condition all that is difficult and demanding, and all that makes life worthwhile—the love, commitment, sacrifice, and giving through which we cultivate our better natures and connect with the realm of sacred things. They are visions of hell and owe their charm to the ease with which we can embrace them, leaving all the difficulties of personal life behind.”

Last week, after learning about the conservative philosopher Roger Scruton’s death on January 12th, I thought back to the time I first listened to him almost three years ago, in a video of a talk he had with the Islamic scholar Hamza Yusuf about the meanings of Conservatism—“What Conservatism Really Means.”

In it, I noticed that Roger Scruton was a close friend to Islam, not the opposite as some presuppose, and quickly grew fond of his other talks and even a few of his books. His conservative, uniquely optimistic attitude aligned closely with prominent Islamic virtues and ideas. In eloquent and beautiful writing, Scruton’s article, Sacred Truths in a Profane World, from which I quoted, discusses whether sacred truth can exist in our destructive modern era.

“We no longer believe in magic connections, and even the concept of human freedom begins to crumble and give way beneath the tide of debunking explanations. The face of the world gradually begins to cloud over: the sun no longer smiles; the birds cease to sing; the naiads vanish from the groves, while the wind in the long grass no longer whispers of God’s love for us. The enchanted world of our ancestors is replaced by a routine exhibition of causal connections. And the laws of motion that govern the universe begin to look like chains, by which we too are bound.“ 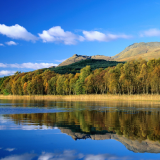 “True freedom is impossible without a mind made free by discipline.”

“Modernity has not healed our pain, it has only dried our tears.”